The Sodium Glow of Debate

Posted on February 6, 2012 by astronomersden

Everywhere I look there is a glow.

I wish it was the Milky Way.

Stronger at the horizon, but still reaching the zenith over my head.

I wish it was moonlight.

I wish it was the afterglow of a naked eye supernova.

But this sky phenomenon is very much Earth bound and entirely a modern human creation and it has the astronomy community in a lather.

I’m torn.  In one respect I feel it is clear cut.

I’m an amateur astronomer who wants to observe and share the glory of the night sky.  The beauty of a dark, star filled night is incredibly moving, utterly breath-taking and the inspiration for so much of humanities achievements in both art and science.

So let’s turn the lights off, claim back the sky, darken our horizons!

I’m a father and husband.

I know that crime is reduced in well lit areas, history and research tells me this.  Road accidents are reduced on well lit roads.  The history of modern urban living has been one of claiming the darkened streets for light and safety.  I wouldn’t want to park my family car on a dark street in West London, the street crime figures here aren’t exactly rosy now!

So on with the lights; bathe my street in a sodium safety net please!

I want to see it, my scope is perfectly capable of seeing it and I know I have looked in the right spot.  But it’s not there.  Well it is, but in this part of the world it may as well not be. 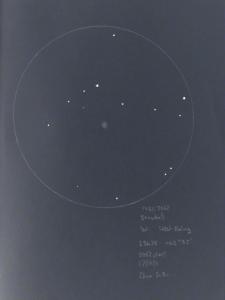 Tiny, faint, exquisite.  And I’m standing in the middle of Regent’s Park, in the middle of the largest city in Europe and there it is, clear and obvious to everyone who comes to look through my scope.

What’s the answer?  It’s not a battle astronomy is going to win, we just can’t and perhaps neither should we.  While I desperately want to show my daughter the infinite sky I also want her to grow up in a town where she feels she can walk the streets at night.  Astronomy is possible in light polluted areas, it’s just a mixed bag and often frustrating.

Compromise? Certainly. Perhaps the search for the dark places that can be improved and made safe should be astronomy’s great urban mission, engaging with local authorities and the police to ensure that those of us with a passion have access in the same way that sport wants access to a playing field.

Turn off the lights? No.  Turn them down? Maybe.

But I would still dearly love to see M76.

3 Responses to The Sodium Glow of Debate