I missed the opposition of Saturn last night.

And a bright pass of the International Space Station.

My plans for sketching M97 and NGC2419 are still on hold.

This weekend’s view of the Lyrid meteor shower does not look promising.

The cricket season has begun.

Has it stopped raining yet Daddy? Author

The skies are overcast and my drought marked garden is well and truly soaked.  I suppose it was envitable really.

But I can’t be too gloomy.  This after all is the result of the complex interplay of Solar System mechanics, chemistry and physics.  The rain soaking me to the skin on my walk home from work is the manifestation of mechanisms that resulted in our very existence, life on Earth, evolution, humans and of course our ability to look out at the Universe and realise all this.

We are taught at school the basics of the water-cycle and most people I would hazard have a vague idea of how clouds and rain come about.  But how many people realise that rain only happens in two places in the whole Solar System? How many people realise the astronomical privilege of witnessing stable water existing at its triple point?  This could be it; this could be the only place in the whole universe where this happens.  That may be unlikely given the number of exo-planets being discovered but even then this may be extremely rare, a phenomenon that can only be seen every few thousand light years.

We live in a unique zone around our star that allows us to be rained on.

Our planet has a strong magnetosphere that protects us from the much of the Sun’s radiation, thus allowing the chemistry of our atmosphere to evolve to its current form. 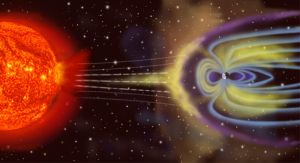 The formation of our planet over 4 Billion years ago fortunately included plate tectonics as well as sufficient accretional and radiogenic heat to warm the early Earth and kick start life and it’s evolution as well as continue to revive and reinvigorate our atmosphere today.

Just near-by in the shape of Mars and Venus, we can see the results of all the above not coming together, both sit on the edges or just beyond the Habitable zone of the Sun, neither has a magnetosphere to shield them from the more damaging spectra.  Mars’ size probably means it is geologically dead, while Venus appears to undergo dramatic resurfacing events as a result of no plate tectonics.

And what of the water itself?  Well it’s a matter of debate and investigation but the evidence suggests that at least some of the water preventing us from enjoying the night sky at present came to Earth from the very same.

Today I was soaked in a comet.