It’s certain I will be long dead.  Bar a major medical breakthrough the chances are not good that a man in his mid thirties who has a deep and meaningful relationship with the bacon sarnie will live that long.  My grandchildren will be retired, my great-grandchildren should be well into middle age.  Maybe they will be looking through an old family album and looking at some bloke “who I think is your great-great-grandfather” looking through a really ancient looking telescope, a photo dated 6th June 2012. 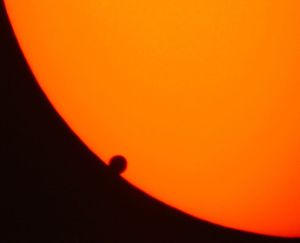 The last Transit of Venus 2004

Two dates linked by a rare astronomical event.  One so rare that it has happened only seven times since the telescope was invented.  For that matter it has only happened 25 times since the Romans were throwing their weight around in Britain.

Why so rare? On the face of it it you would think that a nearby planet passing in front of the not inconsiderable Sun would transit pretty regularly, Mercury for instance transits 13-14 times a century, the next being in 2016. But Venus is a bit of an awkward customer.  It’s orbit just does not play ball.

Look at that on a protractor.  Looks tiny.  Imagine the lines you would draw going on for many thousands of miles though, the separation would become quite significant. 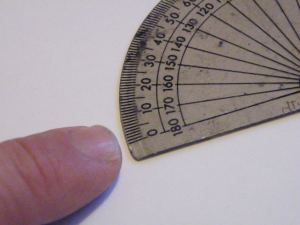 3.4 degrees. A small angle that makes a massive difference to Venus!

Then there is the orbital periods.  Where as Mercury completes over four orbits for every one of Earth’s, Venus completes about 1.6 orbits.  Ok, so what? Well this means that for the two planets to be remotely near the same position that they are in on a given day then ratios of 8 Earth orbits and 13 Venus orbits and 243 Earth orbits and 395 Venus Orbits come into play, and even then there is a significant difference in position….and don’t forget the 3.4o!  For Mercury you can imagine that the cycle is much smaller with regular transits which occur only in May or November every 7, 13 and 33 years.

The transits of Venus on the other hand are much rarer beasts and occur in a pattern repeated every 243 years and pairs of transits are then eight years apart separated by gaps of 121.5 years and 105.5 years.

It wasn’t scientifically observed until 1639 by Jerimiah Horrocks in Preston lanacashire, while in the 18th and 19th Centuries great flurries of activity saw astronomers scatter across the globe to witness the event and gain the access to the knowledge it contained.   The size and distance of the Sun and Venus and the fact that Venus had an atmosphere were all divined from observations in one of the first great international scientific endeavours. 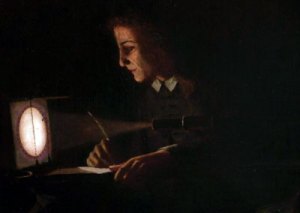 Jerimiah Horrocks makes the first observation of the Transit of Venus

So on 6th June 2012 I will be standing on a hill in West London with good friends, hoping the clouds stay away and peering into the early morning murk hoping to catch a glimpse of a small round dot crossing the surface of the Sun and marvelling at the mad orbital mechanics that will hide this event away for over a century.  I hope my descendants enjoy the next one!

Unless you know how too,

DON’T LOOK AT THE SUN.

Otherwise watch it here with NASA and catch the BBC Horizon special.

1 Response to Transit of Venus