Posted on December 2, 2012 by astronomersden

You have to admire the ingenuity of it.  The deep thinking intelligence of it all.  The precision of the design and architecture.  I mean it was just placed so precisely.  How did they know?

This morning I watched as three planets sat in a wonderful conjunction in the morning sky. Each in turn rose into the sky along the ecliptic, first Saturn, faint and yellow in the purple pre-dawn sky, then brilliant Venus followed, looking for all the world like an approaching Heathrow airliner.  Then as the sky lightened and the Sun was threatening to start the day, little Mercury made its entrance.  Three planets sitting a few degrees apart along the ecliptic from each other.

A whole lot of Planet!

But it was the engineering of the 1970s that impressed me.  Not the orbital mechanics, not the view and perspective the position of four planets in the solar system allowed me, not the heart aching beauty of the dawn on an early winter day.  Not the dramatic differences between these three planets, one a sun scorched, cratered rock, one a tortured world of acid and extreme pressure, the third a gas giant surrounded by rings of ice.  No none of this.

No, what got me excited was the fact that these three planets lined up perfectly with the towers of the Green Man Estate.   How did they know?  Those ancient architects working in the ignorance of the 1970s.  We think we are so clever today with our fancy telescopes and International Space Stations, but compared with this it all pales.  Here was proof positive that when those prefab concrete blocks were craned into middle of West London there was a higher purpose at work, a master plan, a message meant to speak to us down the ages.  Such a rare event with only 12 major planetary conjunctions this year alone and over 600 such events since this concrete estate was assembled it just gives me an enormous sense of privilege and specialness that only I could witness such a unique moment.

The Kipper Tie…the sign of an ancient higher intelligence?

Who knew that those architects were planning such an alignment!  There they sat in kipper ties observing that if an astronomer looked through an, as then, un-built loft room window from a particular  nearby Victorian terrace on 2nd December 2012. that this astronomer would see three planets rise over Evesham and Lacock Towers.  If only we could fathom the deep understanding of it all, then perhaps we could better understand that distant, dark age.

Incredibly, this picture appeared in a UK national newspaper just over a week ago…. 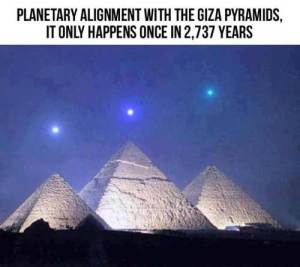 In a word- Bollocks.