Posted on March 7, 2013 by astronomersden

Galileo agreed with Aristotle and thought them to be high atmospheric phenomenon.

Burning gas or some such.

Ancient texts saw them filled with evil intent or foreboding, a sight unpredictable.

In 1066 the appearance of one foretold the fall of Saxon England.

The doom of Harold

The artist Giotto, first of the renaissance painters, was so taken with his sighting of one that he placed it in one of the frescos of Scrovegni Chapel.

The adoration of the Magi by Giotto

Kepler, the decoder of planetary orbits, rejected the possibility that they could follow his ellipses as they did not conform to the ecliptic, so could not be a solar system body. 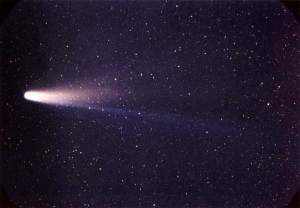 In our age of warm houses, indoor entertainment and light pollution so few in the world have seen them or are even aware of their existence. Indeed in the UK the word Comet is more likely to illicit the image of a now defunct electrical store.

In the past though these were objects of fascination and mystery, feared, misunderstood and admired. They have played a key part in our histories and cultures, references to them appear throughout literature from Gilgamesh to Arthur C. Clarke.

It was the 17th Century that saw some questions answered. While the big name of renaissance science, had passed them off as meteorological, others had begun to peer more closely. It was in Stuart England that reason would start to be applied to our hairy visitors.

William Lower began the process in 1607 when he suggested, from his observations, that Comets did indeed follow a curved ellipse like path that would fit Kepler’s model. Lower like his friend and contemporary Thomas Harriot , is one of the forgotten names of Astronomy, even within England. Overshadowed by the celebrity of the Tuscan, eclipsed in England by the scientific giants that followed at the dawn of the enlightenment, Lower and Harriot were drawing the moon through a telescope before Galileo made it cool.

But it was the bewigged experimenters and observers of the later half of the century that would confirm what Lower suspected.

Many suggested and argued that comets followed an eliptical path, others stuck fast to the notion of a linear course.  The comet of 1680 seemed to answer the issue when the astronomer Gottfreid Kirch deomstrated that it followed a parabolic path around the sun.  Newton used the same comet in his as evidence for his new gravity.

The Comet of 1680 in Principia Mathmatica

But it was another man who sealed the idea and showed that Comets were a recurring phenomenon and not one off objects, by combining Newton’s new gravitational theory with Kepler’s laws to plot 23 histroical comets and crucially make a prediction – a key part of the new scientific method.  Edmund Halley, playboy astronomer, spy, inventor of the diving bell, meteorologist, atheist and sometime naval captain showed that Comets were indeed solar system bodies, adhering to the mechanics and clockwork of the enlightenment universe.

But confirmation of Halley’s work would have to wait.

The comet that bares his name was also his experimental legacy.  Predicted in Synopsis Astronomia Cometicae, Halley asserted that the comets seen in 1456, 1531, 1607 (the one Lower measured), and 1682 were one and the same and that it would return (If he was correct) in 1758. He died in 1742 leaving, in the spirit of the age, his experiment running. It did indeed return in 1758 and Halley was immortalised in the heavens.

Comets followed highly eccentric elliptical orbits that varied in orbital period. They did not always follow the ecliptic, indeed comets appeared to come from all angles of the sky. But they appeared to be predictable and part of the Solar Sytem’s very make up.

Comets had been tamed, no longer harbingers of doom from the gods, but the mystery of their make up and origin remained.

What exactly were comets?

Join me in Part 2 “Giotto of Filton”